If you wrote a late Modernist classic and wanted someone to translate it into French, you could have done worse than getting Georges Belmont on the case. 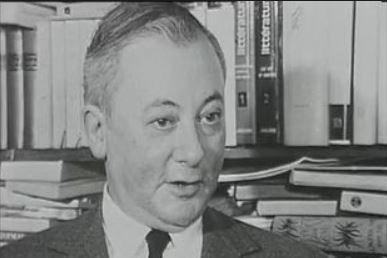 The war broke his career in half, though he worked hard to glue the pieces back together. During wartime, he chose to work for the collaborationist Vichy regime, and was forced later to deny and obfuscate about this period of his life.

Afterwards, he sought to make amends by dedicating himself to a life of letters. He worked as a literary journalist, initially for Paris Match, and began translating mostly Anglophone writers into French. Works by Miller were joined by others by writers such as John Hersey and Graham Greene. He even translated a non-fiction book by Gandhi. Perhaps his best known mid-career work, however, was an interview with Marilyn Monroe he conducted for Marie Claire, which remains in print today.

He tried his hand at some novels of his own, but his true gift was that of translating the work of others, especially Anglophone modernist writers, into French. So when Stanley Kubrick revealed that he was adapting an obscure novella, A Clockwork Orange, for the cinema, it no doubt seemed timely for Belmont to translate the book into French. He did, after all, know Anthony Burgess, and Burgess’s own wife Liana was herself a translator of literary fiction.

Together with his occasional translating partner Hortense Chabrier, and with some input from Burgess himself, who spoke fluent French with a strong English accent, Belmont produced a translation L’Orange Mécanique, in 1972. This has remained the only French translation and has not been out of print since.

Belmont went on to translate Burgess’s non-fiction book Ernest Hemingway and His World, and the two remained friends. In 1981, Belmont and Chabrier again teamed up to translate a Burgess masterpiece, Earthly Powers, whose French translation, Les Puissance des ténèbres, won the Prix Baudelaire for best translation from English into French.

Belmont is perhaps best remembered today for his translation work, as well as his careful editing of the memoirs of Proust’s housekeeper Celeste Albaret. And first among equals of his translations is surely L’Orange Mécanique.

What is striking about Belmont and Chabrier’s translation is how lively it is. They have striven to emulate the estranging and seductive qualities of the original, recreating a Francophone variant of Alex’s idiom in A Clockwork Orange. We decided to explore how he did this, identifying his translation strategies by linguistic analysis of the French Nadsat he constructed for his translation of the novella.

This site uses Akismet to reduce spam. Learn how your comment data is processed.